Home / Event / Ringworm infection in Companion Pets – It’s a Fungus Not a Worm! 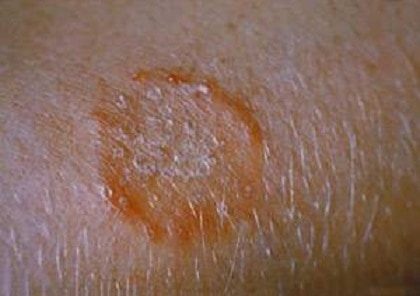 What Kind of Infection is it?

Many people are surprised to find that ringworm is not caused by a worm at all, but by a fungus. The fungi involved are called dermatophytes, and the more scientifically correct name for ringworm is dermatophytosis. The dermatophyte fungi feed upon the dead cells of skin and hair causing in people a classic round, red lesion with a ring of scale around the edges and normal recovering skin in the center. Because the ring of irritated, itchy skin looked like a worm, the infection was erroneously named.  The characteristic ring appearance is primarily a human phenomenon. In animals, ringworm frequently looks like a dry, grey, scaly patch but can also mimic any other skin lesion and have any appearance.

Where would my Pet Pick up this Infection?

The spores of dermatophyte fungi are extremely hardy in the environment; they can live for years. All it takes is skin contact with a spore to cause infection; however, the skin must be abraded as the fungus cannot infect healthy intact skin. This means that freshly shaved, scraped, or scratched skin is especially vulnerable.

Infection can come from direct contact with an infected symptomatic animal, direct contact with an asymptomatic carrier, or contact with spores in the environment. Infected symptomatic animals have skin lesions rife with fungal spores. Carriers may be infected animals who do not have obvious lesions (a common scenario towards the end of treatment) or they may be animals who are not actually infected per se but simply have spores on their hairs, just as a couch might have spores on its surface. Infection is transmitted when spores bind to abraded skin. Skin lesions typically appear one to three weeks after exposure.

There are several species of dermatophyte fungi. Different species come from different kinds of animals or even from soil, thus determining the ringworm species can help determine the source of the fungal infection. Predisposing factors towards infection include age (puppies and kittens are at higher risk than adult animals), life-style (free-roaming or hunting animals being predisposed), and local climate (pets living in warmer, more humid climates are predisposed). Immune suppression from the FIV or Feline Leukemia Virus turns out not to be a predisposing factor as one might expect, especially since immune suppression is a human risk, but there are two breed predispositions of note: Persian cats and Yorkshire terrier dogs. Infection rates are higher in these breeds as are treatment failures.

Can I get this Infection?

Yes, ringworm is contagious to people; however, some people are at greater risk than others. The fungus takes advantage of skin belonging to those with reduced immune capacity. This puts young animals and children, pregnant women, elderly people and pets, those who are HIV-positive, people on chemotherapy or taking medication after transfusion or organ transplant, and highly stressed people and animals at high risk. In general, if you do not already have ringworm at the time your pet is diagnosed, you probably will not get it. Keep in mind that skin must be irritated to become infected.

How does the Doctor know this is Really Ringworm?

In some cases, we know for sure that the pet has dermatophyte fungi while in other cases we are only highly suspicious. Ringworm lesions on animal skin are rarely the classic ring-shaped as in people (in fact, in animals, lesions are often not even itchy) thus some testing is usually necessary as we will describe.

Wood’s Light (Fluorescence) A Wood’s light is a lamp designed to emit light in a specific range of wavelengths. It looks like a black light but is actually entirely different. Ringworm fungi of the genus Microsporum (the most common genus in small animal ringworm cases) demonstrate a chemical reaction when they bind to hair shafts. This chemical reaction fluoresces apple green under the Wood’s light. Fungal spores will not fluoresce without infection so an uninfected carrier will not fluoresce nor will debris not bind to hair.

There is controversy regarding what percentage of Microsporum infections will fluoresce. A commonly published statistic is that approximately 50 percent will fluoresce, but other information suggests that 100 percent of Microsporum infections will fluoresce at least at some point in their course. Fluorescence first becomes detectable five to 18 days post-infection. In many cases, using the Wood’s light uncovers numerous additional skin lesions that were not visible to the naked eye.

Most veterinary hospitals are equipped with Wood’s lights and use them to screen pets for ringworm lesions. Unfortunately, fluorescence may be difficult to find and, complicating matters, many topical products and non-infectious debris will also fluoresce. Further testing is often needed.

Your veterinarian may wish to examine some hairs for microscopic spores. This involves plucking hairs and inspecting them under the microscope. If spores can be seen on damaged hairs, then the diagnosis of ringworm is confirmed; however, as spores are difficult to see, especially in darker hair, many veterinarians skip this step.

Also, this is the only test that is helpful in determining if animal is an asymptomatic carrier. The other tests require an apparent skin lesion to test. A pet with no apparent lesions can be combed over its whole body and the fur and skin that are removed can be cultured. Carrier animals are usually cats living with several other cats.

Some hairs and skin scales are placed on a culture medium in an attempt to grow one of the ringworm fungi. The advantage of this test is that it not only can confirm ringworm but can tell exactly which species of fungus is there. Knowing the identity of the fungus may help determine the source of infection. The disadvantage, however, is that fungi require at least 10 days to grow out. Unfortunately, false negative cultures are not unusual.

A specific growth medium, called dermatophyte test medium, is commonly employed to distinguish ringworm fungi from other fungi. Ringworm fungi classically produce a white fluffy colony and will turn the orange growth medium red within two to 14 days. When the colony is mature, material can be harvested from it and examined under the microscope for ringworm spores.

Sometimes the lesions on the skin are so uncharacteristic that a skin biopsy is necessary to obtain a diagnosis. Fungal spores are quite clear in these samples and the diagnosis may be ruled in or out. Depending on the outcome of preliminary tests, your veterinarian may begin ringworm treatment right away or postpone it until after more definitive results are available.

PCR (polymerase chain reaction) testing is the newest diagnostic technique and can be performed on either tissue or hair samples. This type of testing detects DNA from any fungi that can cause ringworm in pets. The test is relatively fast and is sensitive in its ability to detect spores. Problems with the test are that it will detect spores that are there incidentally so that the patient may have a skin disease other than ringworm but still test PCR positive if spores are innocuously present. The test will also pick up dead fungi in a successfully treated patient, falsely indicating that the infection is continuing when it isn’t. This means that PCR testing is good for making the initial diagnosis but not helpful in determining the endpoint of treatment.

Commitment is the key to success especially if you have more than one pet. Infected animals are constantly shedding spores into the environment (your house) thus disinfection is just as important as treatment of the affected pet. The infected pet will require isolation while the environment is disinfected and should not be allowed back into the clean area until a culture is negative. Ideally all pets should be cultured and isolated until they have been deemed clear of infection, at which point they can be allowed back into the clean area.

Oral medication provides the foundation of ringworm treatment as it renders the fungus unable to reproduce and spread. With the spread of infection controlled, only the pre-existing fungus remains and generally can be removed with topical therapy as described later on.

Currently, two medications are primarily recommended to treat ringworm:  Itraconazole and terbinafine.  Griseofulvin is also available and has been the traditional anti-ringworm oral medication for decades. It is still as effective as the other medications but the newer products appear to be safer and griseofulvin is rapidly becoming a historical note only.

Treatment with oral medication typically should not be discontinued until the pet cultures negative. Stopping when the pet simply looks well visually frequently invites recurrence of the disease.