New lesbian-owned animal hospital welcomes all in the Heights. 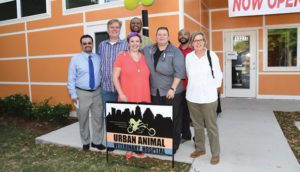 Not to be mistaken for the legendary downtown street skaters from the ’80s, Urban Animal is a new animal hospital in the Heights where diversity is not only desired, it’s expected.

Urban Animal Veterinary Hospital was created to celebrate the uniqueness and dignity of every client and patient. “I want everyone—gay, straight, in a wheelchair, or walking in on two or four legs—to feel dignified and respected,” says owner Hilary Granson.

As a gender-nonconforming person, Dr. Granson knows what it feels like to be judged by looks rather than talent. The native New Yorker worked in the business world until she realized it was getting harder to find new jobs, and the work she did find just wasn’t that fulfilling.

“I was deprived of pets growing up,” Granson recalls. “They didn’t allow animals where we lived, so all I had was a small parakeet. But I loved animals, and when I was thinking of a career change, I decided on veterinary medicine.

“Initially, it was about parrots not getting the right care. I even did an avian internship,” she adds. But now she treats all kinds of pets, from cats and dogs to birds and lizards.

After graduating from Cornell University in 2007, she spent some time in Chicago and North Carolina before deciding that she’d had enough snow and would rather live in a city with warm weather and a good economy. “So I made a leap of faith and came to Houston,” Granson says. Apparently, that’s worked out pretty well. After working for several popular veterinary practices here, she made the decision to open her own hospital to practice medicine her own way. That means state-of-the-art medicine, care and compassion for all animals, and dignity and respect for all humans.

When the hospital opened on April 4 with a ribbon-cutting and crawfish boil, visitors found a new neighborhood practice where their pets could be treated based on breed, age, personality, and lifestyle. They also found that Granson offered the latest in pain management, digital X-rays, ultrasounds, echocardiograms, a heated surgery table, oxygen CCU cages, separate ventilated isolation examination and treatment rooms for animals with infectious diseases, and separate entrances for cats and dogs. The cat side even has feline pheromones pumped into the ventilation system to keep kitty relaxed.

“Veterinary medicine is a lot like pediatrics,” Granson says. “It’s a terrible feeling for a child or a pet to go to a doctor and not understand what is going on, and to be terrified by the experience. That’s why we take time with our patients and give them treats during the exam.”

She says the greatest compliment she has gotten so far was from a client who told her that every time she walks her dog past the facility, the dog tries to go inside. That’s quite a ringing endorsement when a pet actually wants to visit the vet.

And on top of all of that, the gay-owned and -operated hospital (with over half of the staff being LGBT) is not only LGBT-friendly, but also involved in the community. That’s something that Granson feels very strongly about, particularly in the current political climate. But she wants everyone to feel welcome at Urban Animal.

Since she had the facility built from the ground up, she also thought it was important that both the building and the parking lot be ADA-compliant. “You can park, have room to get out of the car with a wheelchair, roll into the building, and have access to every room and office,” she says proudly.

Granson, who is single and lives near the hospital with her two parrots, a cat, and a dog, enjoys the lifestyle in Houston. Her hobbies include motorcycles and shooting—but only for target practice, not hunting. “I could never shoot Bambi,” she says. “I am a carnivore, but I can’t kill an animal that I might wind up helping.” Clearly, human doctors don’t have to face that dilemma.

“Houston has everything that New York has—sushi, theater, concerts. You might have to look for it, but it’s all here.”

And now, the city has a welcoming, state-of-the-art animal hospital for all of the medical needs of our urban pet companions.

Urban Animal offers care ranging from cardiology, dermatology and oncology to internal medicine, pain management and virtually everything in between (as well as separate ventilated isolation facilities for animals with contagious diseases) in efforts to be a full-service hospital that can help pet owners in the Heights and surrounding communities from the early life stages all the way until their beloved friend reaches full maturity.

“There are not a lot of appointment-only practices located centrally in the Heights to make it easy to access, and we have a staff with emergency backgrounds so we can stabilize a critical patient—we’re also open on Sunday when nobody else is,” owner Hilary Granson said.

Granson and her staff pride themselves on providing the full spectrum of care, seeing as no two pets are the same and it’s not possible to account for every contingency.

“When an animal walks through our doors, we don’t know what it’s going to be, and we want to be able to address every situation and help owners when they need it the most,” Granson said. “There are certain cases that may have to be referred to a special hospital and are beyond what we can do in a day practice, but at the very least we should be able to help stabilize it and get a diagnosis for the owners.”

“I’ve seen too many times when animals struggling to breathe or are holding on by a thread are turned away from treatment, and that’s not good for the animal or the owner,” Granson added. “I want to take that unknown and stressful factor out and help them make a more informed decision when they’re not in a panic.”