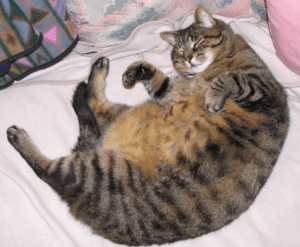 Obesity has become an extremely important health problem in the Western world, not just for humans but for dogs and cats as well. Obesity in pets is associated with joint problems, diabetes mellitus, respiratory compromise, and decreased life span; recent estimations suggest that up to 35 percent of dogs and cats in the U.S. suffer from obesity.

Why Obesity is Bad

A common justification for over-feeding treats is that a pet deserves a higher quality of life as a trade off for longevity. While this might on some level makes sense (after all, a pet munching on a treat is certainly getting a great deal of satisfaction from doing so), the other consequences do not make for higher life quality in the big picture. Here are some of problems that obese animals must contend with while they are not enjoying their treats and table scraps.

Arthritis
The over-weight animal has extra unneeded stress on joints, including the discs of the vertebrae. This extra stress leads to the progression of joint degeneration and creates more pain. Weight management alone decreases and can even eliminate the need for arthritis medications. The problem is compounded as joint pain leads to poorer mobility, which in turn leads to greater obesity.

Respiratory Compromise
The obese pet has a good inch or two of fat forming a constricting jacket around the chest. This makes the pet less able to take deep breaths as more work is required to move the respiratory muscles. Areas of the lung cannot fully inflate, so coughing results. The pet also overheats more easily. Many cases of tracheal collapse can be managed with only weight loss.

Diabetes Mellitus
Extra body fat leads to insulin resistance in cats just as it does in humans. In fact, obese cats have been found to have a 50% decrease in insulin sensitivity. Weight management is especially important in decreasing a cat’s risk for the development of diabetes mellitus.

How did my Pet get so fat without eating that much?

You might think weight management might be easier for a pet than it is for a human. After all, the pet relies completely on someone else for feeding and exercise so it should follow that if the humans in control can regulate feeding and exercise, the pet should lose weight. It seems like this would be true but, as with humans, there is tremendous individuality with how different pets store the food they have eaten. Beyond this, sometimes it is hard to know what a pet is eating or the owner may not have a good sense for how much should be fed. Here are some factors involved:

A cup of food depends on the cup
When food packages refer to a certain number of cups of kibble being appropriate for a certain body weight, they are referring to an actual measuring cup. This may seem obvious but many mugs, coffee cups, and other scooping cups may not be equal to a cup measure. If you do not have a cup measure, you can often get one from your veterinarian’s office as most manufacturers of reducing diets for pets provide free cup measures.

The package guidelines are just guidelines
Many packages of food include on their label some sort of feeding schedule that indicates how much food should be fed to a pet of a certain weight. This information is also available on most pet food web sites as well. The problem is that each pet is an individual and just as one person weighing 150 lbs can be obese and another person of the same weight may be skinny, the same is true of pets. These guidelines are meant as a starting point only. If your pet is too fat on the recommended feeding schedule, then you should reduce the amount of food or change to a diet that is higher in fiber so that a satisfying volume of food can still be eaten without adding calories.

Children at home
It is almost impossible to keep children from providing extra treats to their dog. This may include snacks spilled during play (pets have no “five-second rule”) or purposely feeding the pet unwanted food under the dining table. Similarly, pets that are allowed to roam (usually cats) often find food left out by neighbors, either to purposely feed their own pets or strays, or as unsecured trash. It is almost impossible to control the diet of an outdoor cat.

Slow metabolism
Some pets do not burn calories efficiently; they simply have a slow metabolism. This might be genetic as mentioned or it might be the result of a disease such as hypothyroidism or Cushing’s disease. Testing for health problems such as these is helpful to get the best treatment for resolution of the obesity. It seems like increasing exercise and eating a healthier diet would be easy to accomplish for a pet but it generally does not turn out that way.

Underestimation of the power of treats
Many people express their affection for the pet by providing regular treats, and the pet happily obliges by begging or even performing cute behaviors. For some people, feeding treats to the pet constitutes a major part of the human-animal bond and they do not wish to give it up or reduce it. Pet treats are often high in calories, though, and four or five treats readily converts into an extra meal’s worth of added fat. Free feeding of dry food encourages the pet to snack as well; meal feeding represents better calorie control.