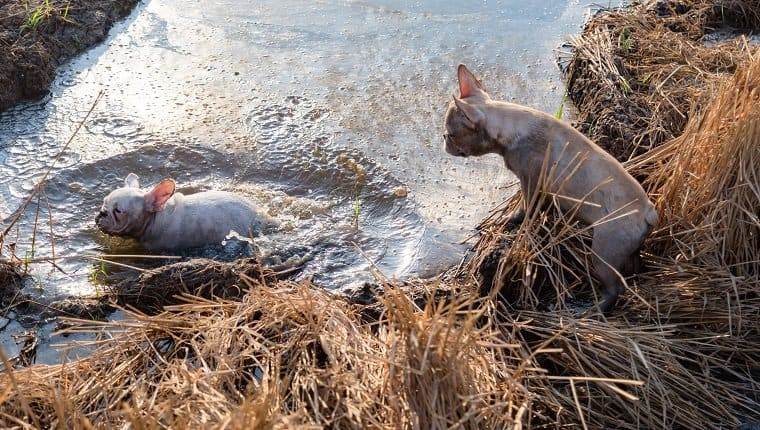 The easiest way to understand Cryptosporidium species and how they cause disease is to think of them as another kind of gastrointestinal parasite.  Cryptosporidium have some uniquely unpleasant features

Out in the world, Cryptosporidium oocysts (the infective stage shown on the right) are very

tough. They resist bleach and most other normal cleansers. Only prolonged exposure to ammonia or extreme temperatures can kill them.

This photograph depicts the oocyst releasing sporozoites after it has been swallowed by its new host (as described below). The sporozoites are the stage that kills intestinal cells.

The life cycle of this organism is rather complicated and it is not necessary to understand all the stages. The short version is that an oocyst (sort of like an egg) is passed in the feces of an infected animal. This oocyst is swallowed by another animal by licking dirt off its fur, drinking contaminated water or some such activity. The oocyst releases sporozoites (sort of like a spore) into the intestinal tract of the new host. The sporozoite infects an intestinal cell and divides. The spores divide into other stages with other names, which in turn infect more cells.

There are actually two types of oocysts: one that is thick-walled and ready to be passed in feces to face the external world, and one that is thin-walled and just infects the host over again from the beginning.All this cell division occurs asexually for a while until eventually the
Cryptosporidium begins a sexual phase: instead of making more copies of itself by simple cell division it produces male and female cells. Fertilization occurs, yielding oocysts like the egg that started it all.

This is an important and bad fact so we will say it again: the thin-walled oocyst infects the host over again from the beginning. No contaminated water is needed. No dirty fur necessary. This is now a self-perpetuating infection.

How Rare is this Parasite?

The prevalence of Cryptosporidium oocyst shedding in dogs has varied from 2 percent to up to 15 -20 percent in stray dog populations. Fecal specimens from 200 stray dogs impounded at the San Bernardino City and County animal shelters were screened for Cryptosporidium oocysts and 2 percent of dogs were found to be oocyst positive. A similar survey of 206 cats revealed oocyst shedding in 5.4%. Most infections are subclinical, meaning that the host animal is not sick.

Humans tend to get their own species of it (Cryptosporidium hominis) while cats and dogs each have their own Cryptosporidium. Pet ownership has not been found to be a significant risk for humans with cryptosporidiosis (i.e., most infected humans get infected from other humans or from livestock).

A routine fecal flotation test, as is recommended once or twice a year for most pets, is likely to miss Cryptosporidium as it is such a small organism. At this time more specialized testing such as PCR testing for Cryptosporidium DNA or ELISA tests for Cryptosporidium proteins are the best way to go, but these tests were developed to detect the Cryptosporidium species that infect humans so there may be some issues with sensitivity. Screening routinely for Cryptosporidium is probably not warranted for healthy animals unless they are going to be spending time with immune-compromised individuals.

The bad news is that treatment is difficult. Nothing can really be described as highly effective. There are some antibiotics like Azithromycin and tylosin that have been shown to help clear the infection. But it is not always 100% effective and often requires the host to become more immunocompetent. A medication called paromomycin has been effective but is highly toxic to the kidneys. Fortunately, most infected animals have healthy immune systems and, even though medication may not be fully effective, the patient’s own immune system is usually able to control, if not fully curtail, the infection. Many animals appear to carry this organism without symptoms.

If you dog or cat companion has refractory diarrhea, Urban Animal can help. Call us to schedule an appointment today!