In Virginia, for the 6th year, its commemoration honored more than just the human soldiers who have sacrificed for their country but also their four-legged patriots. Dogs have been a part of the Department of Defense since WWII. In Vietnam they were used to sniff out snipers. Canines are also used to sniff out the buried land mines.

For all dogs for us, sometimes our brave canine militia doesn’t gets the recognition they 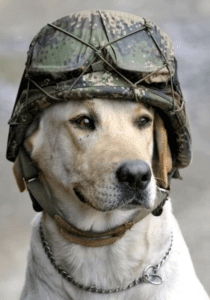 deserve. Dogs, without question, throw themselves into the line of duty and protect our 2-legged men and women; So, it’s important to remember and recognize the important role they play in our military.

The first canines soldiers were used in WWII as well as at Warren County’s Remount Center in Front Royal in 1942. The way they are treated in battle has changed a lot since then.

Canines can now enjoy rank they have also have earned the right to go home with their handlers. They are no longer as they used to be, abandoned on the battlefield. At Virginia’s commemoration, speakers expressed how many dogs of war stay by service members sides even after they leave service as therapy and companion dogs.

“You’re not with those that you served with anymore, you’re not in uniform you go back to your home town and that transition period can be challenging.” MacDougall says.

Organizers of that event say the armed forces currently has over 5,000 K-9’s on duty, Think about the brave pooches that have sacrifice themselves for us. Urban Animal salutes our canine companions!