Heartworm disease is caused by an infection of the parasite Dirofilaria immitis (D. immitis).  This is a nematode – a type of microscopic ‘worm’ – that enters and is picked up from animals when the female mosquito feeds. When a mosquito harboring the parasite feeds on an animal, it allows the parasite to enter the animal’s tissues and blood stream where the worm eventually migrates to the pulmonary arteries, which are large blood vessels that extend into the heart. As these worms mature into adult heartworms, they obstruct the normal flow of blood from the heart through the pulmonary artery to the lungs. When the number of heartworms is very large, they can spread into the heart itself.

In addition to disturbing normal blood flow, the presence of heartworms also cause inflammation in the pulmonary vessels and lungs. This can lead to thromboembolic disease, pulmonary hypertension (elevated pulmonary blood pressure), reduced oxygen, difficulty breathing and potentially death.

While adult heartworms typically live in the pulmonary arteries, in some cases abnormal migration and locations occur and include the right and left ventricles of the heart, other blood vessels and sometimes even in the tissues of the nervous system. The symptoms seen with the disease can vary depending on the location, the species infected and the severity of the infection.

The most frequent signs that may be noticed include a persistent cough, difficulty breathing, exercise intolerance, decreased appetite and weight loss. In more severe infections or in non-canine species such as cats and ferrets, the symptoms may be more dramatic. Consequences of a severe infection or infection in a smaller animal can result in lung inflammation, hemolysis (bursting of red blood cells) and ensuing anemia, liver and kidney failure, hypertension, hypotension, shock, thromboembolic disease and heart failure.

In addition to the previous symptoms, cats may may also develop asthma-like attacks, vomit, show decreased interest in food and weight loss. Unfortunately, in smaller species such as cats,the first sign in some cases is sudden collapse or death.

Testing is comprised of two primary things: looking for the adult worm antigen (a foreign substance that comes from the uterus of the female worm) and also checking for the presence of immature larvae (micrfilaria). In cats, however, combining an antibody test with an antigen test may result in better detection.

The best treatment is prevention. While there are a number of products on the market 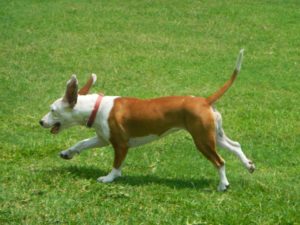 today for the prevention of heartworm larvae, these products can be broken into two categories: the avermectins and those that contain milbemycin. Together, these two products are known as macrolides and they are designed to kill the infective larvae stages.