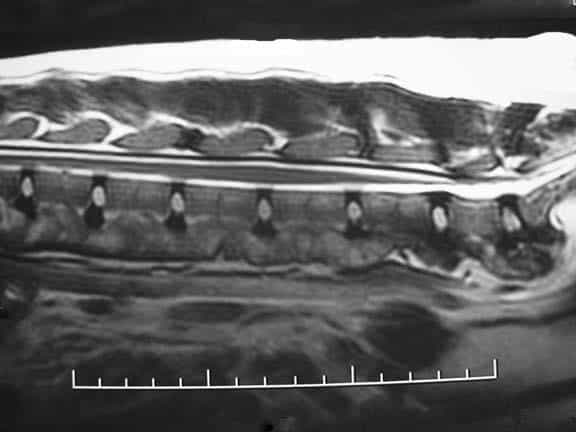 Imaging in veterinary medicine has advanced greatly since the first radiographs (x-rays) were taken of pets just decades ago. Today a range of imaging tests are available to help diagnose and treat diseases in our pets. These tests include radiography (x-rays), ultrasound, CT (or CAT) scans, and MRI scans. Each of these tests has its own advantages and disadvantages, and will provide the veterinarian with different information. Many of these tests are available in general veterinary practices, but some, such as CT and MRI scans, are most often performed by specialists in large referral practices or veterinary schools.
As with all tests, none of them is perfect for every situation. Your veterinarian can help you decide which test is most appropriate for your pet’s issue.

The following is a brief description of different types of imaging:

A radiograph, commonly called an x-ray, is a black and white two-dimensional image of part of the interior of a body. An image is generated by passing radiation through a particular structure or area, such as the chest or a limb, and the image is then captured. The traditional way of recording the image is on specific x-ray film that senses how much radiation passes through the structure and reaches the film, much like photographic film captures light. The denser a tissue is (such as bone), the whiter the image is on the film. Less dense structures, such as air in the lungs, allow almost all of the x-ray energy to pass through to the film, turning that area black.

Radiography is the most common and readily available imaging test in veterinary practice. It is used to evaluate the size and shape of organs, such as the heart and lungs, as well as to demonstrate broken bones, some foreign objects, fluid accumulations, and many more abnormalities that may aid in diagnosis. It is also the most affordable imaging test, and is most often done prior to any of the other imaging options.

There is a subcategory of x-ray studies that use contrast dyes that show up on radiographs to highlight certain structures. The most familiar of these is the barium series, in which either a liquid or a paste containing barium is given orally or by enema to a patient to highlight a part of the gastrointestinal (GI) tract. Because some objects do not show up on radiographs (such as plastic, cloth, toys, rubber, etc.), barium can help diagnose obstructions or blockages.  Barium shows as bright white on radiographs, so if it reaches a certain point in the GI tract and stops abruptly, we can infer that there is something blocking its progress. Sometimes we can also see a foreign object outlined by the barium trying to get around it.

The reason it is called a barium “series” is because it’s necessary to take a series of x-rays at timed intervals as the barium goes through the stomach and intestines to the large intestines.  The amount of time the series must be continued depends on what is found, but it can take up to 24 hours to complete in some cases, so usually the pet is hospitalized for the day. Some patients may even need to return to the hospital the next day for follow-up.

A barium study can be done in any clinic that has radiographic equipment and liquid barium. However, if the pet is vomiting so much that the barium cannot be retained in the GI tract, the test may not be useful.

Unlike radiographs, no radiation is used in an ultrasound study. An ultrasound machine uses sound waves to create images. Real-time moving images are displayed, and still images can be captured as well. Ultrasound can “see” some things that can’t be visualized on radiographs.
For example, if the abdomen is filled with fluid, the organs can’t be distinguished on traditional x-rays because fluid and tissue have the same density. However, they appear quite different from each other on an ultrasound image, so we can see through the fluid. It is also useful, for the same reason, for seeing inside an organ such as the heart or liver.
In summary, while x-rays capture a general global image, an ultrasound evaluates the unique structures within each organ and can see discrete masses, obstructions and material inside the organ it is looking at. These things include: if the gall bladder is filled with sludge, if ingesta is moving through the gastroinestinal tract as well as if fluid is accumulating in the abdomen or chest. It also evaluates the texture of organs and can help discern whether the texture is appropriate or suggestive of a disease process.

In addition, ultrasound is painless and does not require anesthesia or even sedation in most cases unless the pet is particularly anxious or aggressive.  For an ultrasound evaluation to be done, the pet does need to have the hair shaved from the evaluation area because fur interferes with the images.

This test is typically done after blood tests, x-rays, or a physical examination indicates a possible problem. It is useful for evaluating abdominal organs, eyes, and the reproductive system. As with people, it can be used during pregnancies. A specific ultrasound called an echocardiogram is used to visualize the heart and blood vessels as well as its valves.

In this test, the patient is placed on a table that moves through the scanner, which sends x-ray beams through the patient from a variety of angles. Sensors then detect them and send the signals to a computer that interprets the information and displays an image that looks like a slice of the body. As the table moves slowly through the scanner, a new slice is imaged at short intervals, each one a little further back or forward from the previous slice. Because multiple images are being taken over a period of time, the pet usually is anesthetized in order to keep it from moving while going through the scanner.

These images are white, black, and various levels of gray. Depending on how dark or light the gray is, a radiologist can see how well tissue absorbs the x-ray beam, and can thus identify abnormal tissue. It can differentiate tissue and display smaller structures, such as lung nodules, better than a traditional radiograph. CT scans are helpful in a variety of areas. Some of the most common indications for a CT scan are nasal disease, brain and spinal cord disease and injury, lung disease, and urinary tract abnormalities.

CT scans are also often used to help plan for surgical removal and/or radiation therapy for tumors. There are even 3D CT reconstructions that can show a structure in a 3-dimensional manner. This reconstruction is especially useful for radiation therapy planning. Another application of 3D scan technology is relatively recent. That is the use of 3D printers to fabricate structures based on the 3D scan. For example, in dogs that have a severely damaged jaw bone from a gunshot wound or collision with a car, the damaged part can be reconstructed, sterilized, and inserted into the damaged area to replace missing or badly damaged bone.

As with the other imaging tests, there is also a subset called contrast CT in which a contrast dye is injected into the patient to highlight certain structures and make them stand out on the CT images. These are especially useful in imaging the brain and spinal cord.

Due to the high cost of the equipment, CT scans are more expensive than radiography or ultrasonography, and are usually available only in referral centers or large practices.

Magnetic resonance imaging (MRI) is another modality that can be extremely useful in certain patients. It uses both magnetic fields and radio waves to create images, so it is less invasive to the body than x-rays. A strong magnet – up to 40,000 times as strong as the earth’s magnetic field – briefly “magnetizes” the cells in the body while images are taken. An MRI can clearly show the interior of an organ.  As with CT scans, pets are usually anesthetized because they must remain motionless.

As with CT scans, an MRI is useful for imaging certain structures, and contrast studies are used for some evaluations. Each test has its advantages and disadvantages, and the specialist performing the scan will choose one over the other depending on what exactly what is being evaluated.

Although an MRI is sometimes the only way to get a correct diagnosis, it is also the most expensive of the imaging tests currently available. There are several reasons for this, including the cost of the machine (as much as $1 million or more), as well as the cost of the facility needed to house the machine. Since it generates such powerful magnetic fields, it must be housed in a specially shielded area in order to protect the rest of the building from the magnetic waves (which can ruin computers and medical equipment in seconds).  The cost of operating the equipment is also substantial. A board-certified veterinary radiologist most often reads the images.

In spite of the expense, MRI scans are now available to nearly all patients, as more and more referral facilities are using this equipment. Once thought of as an exotic test in veterinary medicine, it is now becoming quite common for pets to have an MRI scan as part of the diagnostic process.

The Future of Imaging

As technology continues to advance, new options are becoming available to veterinary patients. Among these is a growing field called interventional radiology, in which images are used not only for diagnosis, but also to target specific organs or tumors for therapy. Most of us are familiar with cardiac catheterization and angioplasty in human medicine; this is an example of interventional radiography.

In veterinary patients, there are many examples. One of the most exciting is the development of minimally invasive cancer treatments. For example, some tumors can be visualized with contrast fluoroscopy (basically a moving x-ray picture) or ultrasonography, and a catheter can be advanced directly into the blood vessels that supply the tumor while the radiologist guides it by watching the screen. Chemotherapy drugs can then be injected directly into the tumor, destroying or damaging it with much lower amounts of toxic drugs because only abnormal tissue is being targeted.

Other relatively new technologies that are becoming more commonly available include 3-D ultrasonography and tissue elastography. In 3D ultrasonography, a computer uses multiple ultrasound images and builds a realistic 3-D image from them. These images can be displayed in real-time, so that a structure can be evaluated from various angles to give a more accurate overall picture. 3D imaging is especially useful for evaluating complex cardiac structural abnormalities.

If you think your pet requires imaging, Urban Animal can help. Call us to schedule a consultation and we can get your pet scheduled in-house for radiographs, abdominal ultrasound, an echocardiogram or referred for CT or an MRI.