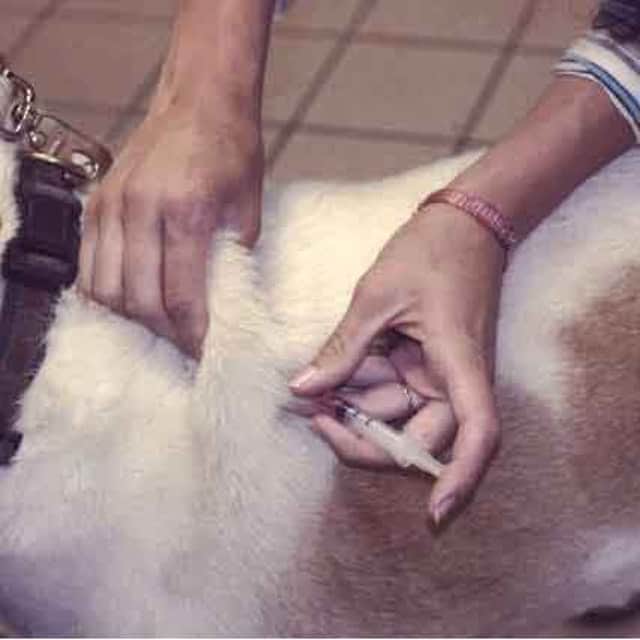 The following article is from VeterinaryPartner by Wendy Brooks, DVM, DAVP

Insulin is the injectable medication you use to control your diabetic dog’s blood sugar. When insulin therapy is started, the optimal dose for your pet is unknown and will have to be determined by trial and error. Most dogs will need insulin injections twice a day, though occasionally a patient is found where a single dose is long acting and once-a-day insulin works out. A dose will be selected based on what research has shown to be a good starting point, and after a couple of weeks your dog will return for a glucose curve where blood sugar levels will be mapped out over the course of a 10 to 24 hour period. The curve will show if the insulin is lasting long enough and if the dose should be raised, lowered, or kept the same. Alternatively, you can learn how to monitor your dog’s blood glucose levels yourself but if you are a beginner you may want to master giving the injections before moving on to taking blood samples.

There are two commonly used insulins for dogs: Vetsulin®, which is of pork origin (pork and dog insulin are molecularly identical so essentially Vetsulin is canine insulin) and Humulin N, which is human insulin (produced through genetic engineering technology). There are other types of insulins but as these are rarely used in dogs, probably will not come up except for special circumstances so they are omitted from this discussion.

Vetsulin is available through your veterinarian’s office or through veterinary pharmacies, while Humulin N is available through any regular pharmacy. Both are now available in pens as well as in vials. The pen is fitted with a cartridge containing the insulin and a needle tip, the dose is dialed in, and insulin is delivered with the press of a button. Vials still require syringes.

Be sure you understand how much insulin you are supposed to give your pet.

Do not adjust your pet’s insulin dose without veterinary guidance.

The bottle you are currently using need not be refrigerated although if you have a supply of insulin bottles, it is probably best to refrigerate the bottles that are not in use.

Syringes for use with Vials

Human and veterinary insulins are made at different concentrations and thus each requires its own type of syringes for proper dosing. Insulin syringes are extremely small in diameter so that injection will not be painful. It is a rare patient that objects to insulin shots per se, but some dogs resent being held still. It is crucial that the injection goes into the dog rather than into the fur so let your veterinarian know if you would like a small spot shaved to facilitate the injection.

Always be sure you have the correct syringes for your insulin.

Used syringes should be placed inside a thick plastic container, such as a liquid laundry detergent bottle or similar receptacle. If the needle is enclosed in such a container, the entire container can be closed up and disposed of in the regular trash at home. Specific containers can be purchased for needle disposal or the used syringes can be returned to your veterinary hospital for disposal if you prefer. Some states, such as California, have specific regulations for disposing of sharps.

How to Give the Injections

First, feed your dog.
The blood sugar of a dog that has not eaten a normal meal but receives insulin may drop to

a dangerously low level. If your dog is not eating, this could indicate a need for a checkup with your veterinarian. After your dog has eaten, you are ready to give the injection.

Before drawing up the insulin in a syringe, roll the bottle back and forth in your palms so that the white material in the bottom is mixed in to the rest of the solution.

After you have the insulin dose ready in the syringe, it is time to get your dog. Be sure you can trust your dog to hold reasonably still for the shot. Most dogs do not require a second person to hold them still but some dogs are rambunctious and a helper is necessary. If you have such a pet but no helper, consider tying a short leash around a piece of furniture. (Use a slip knot in case of a choking emergency.) Some dogs are uncooperative and require a muzzle.

Lift up a fold of skin, ideally along the side of the body. This will create a small space for the needle. Insert the needle into this space and inject the insulin. Withdraw the syringe and needle when you are finished.

See how to do this in a video.

An insulin pen is a gadget that allows precision insulin measurements and push button ease of administration. The gadget is called a pen because it is shaped like a writing pen. A cartridge of insulin is snapped inside and a small needle tip is applied to the pen tip (a new tip should be used each time). The dose is dialed in with accuracy up to the half unit, which is much more accurate than trying to eyeball tiny doses with a syringe.  The pen is primed with a dose before it is used on the patient.  You insert the needle through the pet’s skin, and then you press a button at top. The needle must stay in place at least five seconds to ensure the full dose has been delivered. Most people find this method of insulin delivery easier than using syringes.

Most human insulins are available as pens but Vetsulin® is the only veterinary insulin available as a pen. Pens for human use are generally disposable once they are used up. The Vetsulin® pen can be reloaded with a fresh cartridge once it is empty. The needles tips should be disposed of with the same precautions for syringe disposal.

Pens cannot be refrigerated without disrupting their measuring mechanism. This means that the insulin cartridge within the pen is good for about six weeks before it must be discarded and replaced. The needle’s tips should be disposed of with the same precautions as for syringe disposal. See a video on how to use the insulin pen.

If you want to see the original article in its entirety, you can view it here.