People go bald but what does it mean when you canine companion loses his or her fur? There are many reasons for fur loss including:

Alopecia is the medical term for baldness. In Nordic or double-coated breeds, a specific pattern of baldness has been noted that results in a symmetrical loss of fur on the body sometimes paired with dark pigmented skin in the bald areas. This type of fur loss has been named Alopecia X.

We don’t know exactly what causes Alopecia X although there are some theories. At this point in time, the condition is not associated with other harmful effects as seen in endocrine diseases like Cushing’s or hypothyroidism.
Here’s what we know about this condition: 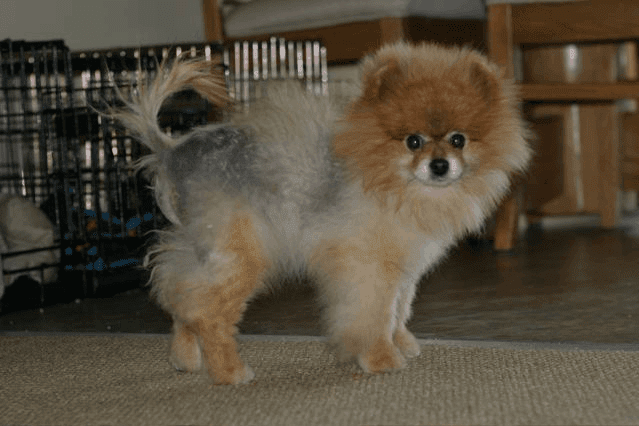 How to Diagnose:
Alopecia X is a diagnosis made by ruling out the other causative agents of fur loss. The most common things done to test for other ailments are listed below:

Spaying and neutering
While the exact cause of Alopecia X is unknown, in some instances spaying or neutering intact animals has resulted in fur growth. For this reason, the first step in treatment is to sterilize the patient, assuming they are intact; unspayed females should be spayed, intact males should be neutered.

Step Two for Animals Already Sterilized
What if the pet is already neutered or if several months have gone by after altering and no hair has regrown? The next simple therapy to try is oral melatonin.

In a high number of dogs after 2-3 months of melatonin, fur regrows. If it doesn’t, speak to your veterinarian. There are other treatments but many have considerable side effects. Alopecia X may look a little interesting, but it is a cosmetic condition. It does not cause harm.