Struvite is a urinary mineral composed of ammonium, phosphate, and magnesium. These three substances are common in urine and if they exist in high enough concentrations, they will bind together in the form of crystals. Struvite crystals are normally found in urine and have no significance on their own. Problems occur when these crystals combine with mucus and form a urinary plug that can cause a blockage in a male cat’s urinary tract (see feline urinary blockage) or when the crystals bind together to form a bladder stone.

Struvite is also sometimes called triple phosphate, based on some early studies that had misidentified the minerals. The name has stuck, though, so you may hear this term.

If Struvite Crystals are Normal, why do Some Cats Form Stones?

There are several factors at play here. The pH of the urine, presence of proteins around which the crystals can aggregate, and urinary water content all are important issues. Ultimately, these factors come together to contribute to a urine that is supersaturated with struvite. In dogs, infection is necessary to create a struvite bladder stone but in 95% of cats with struvite stones no infection was involved (though sometimes the stone can lead to infection.)

While bladder stones can sometimes be found incidentally while looking into another problem, most of the time they are found when the cat is showing signs of lower urinary tract disease: 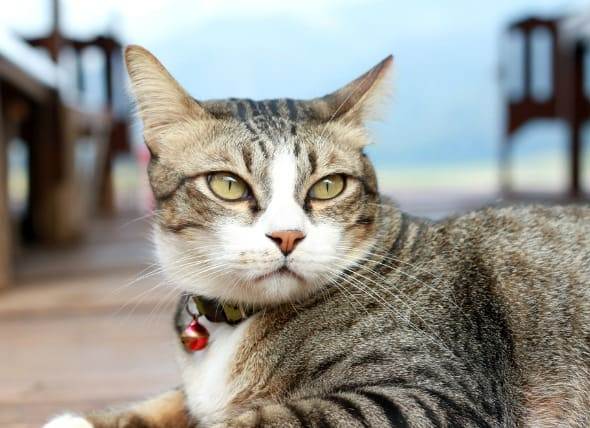 Struvite stones can be dissolved by feeding specific diets. There are several commercial brands available and they all act by creating a bladder environment that is favorable to dissolving the struvite crystals back into the urine. In order for this treatment to work, the patient must eat the dissolution diet as the sole food. Obviously, the cat should not have a second disease that makes the stone diet inappropriate and the cat must be fed only the urinary diet and nothing else. If the cat does not like one diet, another can be selected; both dry and canned selections are available and can be mixed together though there is some thinking that the extra water that goes with a canned diet is more beneficial for stone dissolution.

A typical protocol involves radiographs every 3 to 4 weeks to confirm that the stone is actually dissolving, though some cats are able to dissolve their stones in as short a period as 7 days. If the stone does not completely dissolve, it may not be composed entirely of struvite (calcium oxalate stones will not dissolve with diet) or there may be some other reason why the stone is not dissolving (cat is sneaking food elsewhere, etc.). On the average, it takes about 6 weeks for a stone to dissolve. While smaller stones might, many larger stones don’t dissolve and require surgical removal.

Surgery to remove a bladder stone is called a cystotomy. Here, the bladder is opened and the stones inside are simply removed. The bladder and belly are closed up and the cat is able to go home when there is a good appetite and normal urination. Some blood in the urine can be expected for several days after surgery and there may be some urinary discomfort for the first several days that necessitate pain medication.

After surgery, the stones are generally sent to a specific laboratory for analysis to confirm the stone type.

To avoid forming new struvite stones it is helpful to use a diet that creates a bladder environment that is not conducive to stone formation. There are numerous such urinary formulas and sometimes the same diet that was used to dissolve the stone can simply be continued. Ideally, a canned formula is used because canned foods have extra water and that helps make more dilute urine – and dilute urine means a lower crystal concentration.

If it is not possible to feed an appropriate diet, the use of urinary acidifiers may be necessary. Your veterinarian may recommend some monitoring tests to make sure the pH and urine concentration stay in a range where struvite stones should not form.