Canine Arthritis and Some Information About the Drug Galliprant

Home / Event / Canine Arthritis and Some Information About the Drug Galliprant 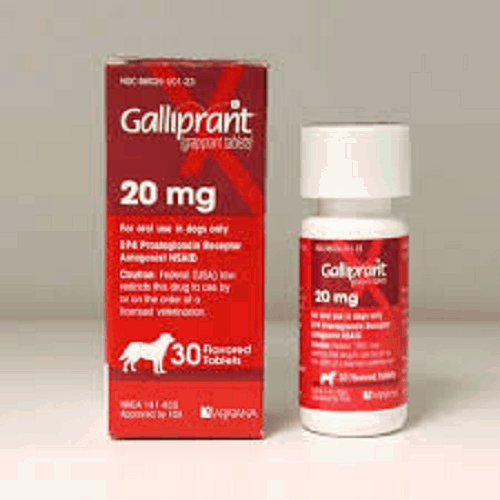 Canine Arthritis and Some Information About the Drug Galliprant

The brand name Galliprant is used for a new drug callled Grapiprant. This drug was designed for long-term use to help with canine arthritis. It HAS NOT BEEN APPROVED FOR CATS.The importance of pain relief cannot be overemphasized. Dogs, especially large breed dogs, commonly suffer from arthritis pain and loss of mobility, especially as they age. The issue can become so extreme that life quality is impaired. Human pain relievers abound but because many are toxic or dangerous to dogs, medications made just for dogs have evolved. The development of canine-friendly non-steroidal anti-inflammatory drugs (NSAIDs) created a revolution in pain management for dogs to a point where NSAIDs have become standard components of arthritis pain relief as well as surgery-related analgesia.

One of the limitations of the NSAID group has stemmed from the biochemistry of the prostaglandin suppression that NSAIDs use. NSAIDs work by suppressing prostaglandins. The problem is that we do not want to suppress all prostaglandins, just the ones associated with pain and inflammation. As more sophisticated NSAIDs were developed to suppress only certain pathways, we still found that even prostaglandins typically considered “bad” can still have some good effects. In other words, even the use of the most innovative NSAIDs has been a double-edged sword in certain situations. We only want to suppress pain and inflammation; we don’t want to decrease blood flow to the GI tract or kidneys, nor interfere with the ability to clot blood.

Enter the piprant class of anti-flammatory drugs. Grapiprant is the first priprant anti-inflammatory to come market with its release in 2017. Grapiprant does not suppress prostaglandin production; instead, it interferes with a specific prostaglandin receptor called the EP4 receptor. It is the receptor involved in generating pain and inflammation. By interfering with only the EP4 receptor, grapiprant suppresses pain with no supposed effect on the kidney, blood clotting mechanisms, or GI tract. In this way, the side effects and drug reactions that have been concern for patients on NSAIDs should not be concerns with grapiprant. That said, the drug is relatively new and long term studies are needed to further evaluate side-effects over time.

How this Medication is Used

Grapiprant is used once a day to manage pain in dogs. It works best when given on an empty stomach.

Interactions with other Drugs

Grapiprant use in combination with corticosteroids (prednisolone, dexamethasone, triamcinolone, etc.) has not been studied and the manufacturer recommends against concurrent use of these medications. Similarly, grapiprant should not be used with NSAIDs.

The Issue of Protein-binding

Grapiprant is highly protein-bound and this is a potential problem when it is used with other highly protein-bound medications. What this means is that drugs that have a high-protein affinity will fight with each other to bind with blood proteins. The drug that “loses” must float free in the bloodstream where it is more active in its effects and potentially more likely to show toxicity or side effects. When two protein-bound drugs are used together, one is likely to be a problem in this way and it is not predictable which one will be a problem.

Grapiprant is not approved for dogs under nine months of age and cannot be accurately dosed in dogs under eight pounds of body weight.

Grapirant has also not been evaluated in breeding, pregnant, or nursing dogs.

Unlike NSAIDs, grapiprant has no use against fever.

Grapiprant has only been tested in healthy dogs, though in healthy dogs given 15 times the recommended dose for nine months no serious consequences resulted. This represents a broad safety margin.

Given that grapiprant does not interfere with kidney or GI blood flow, it should theoretically be safe to give in dogs with kidney insufficiency or with intestinal disease but theory is still theory. Again, grapiprant has only been tested in healthy dogs and further studies are needed.

Grapirant has not been studied in dogs with heart disease. This is important because there are a lot of EP4 receptors in heart tissue. The consequences of this are unknown.

If a dose is missed, do not double up on the next dose; just give as usual. This medication can be given regularly or on an “as needed” basis as long as it is not used more than once daily.