Marijuana is enjoyed recreationally and medicinally around the world. While people find the effects of marijuana pleasant and can benefit from it’s many effects when used to treat illnesses, dogs are not so fortunate.

Another cannabinoid chemical worth mentioning specifically is Cannabidiol, which is not considered recreational and is of a more medicinal nature. Cannabidiol has been used in human medicine to mitigate anxiety, improve appetite, relieve nausea, control seizures of certain types, and assist in sleep disorders.

Canines and Cannibis
The usual pet toxicity case involves a dog that has inadvertently eaten a stash of marijuana. In dogs, clinical signs typically begin 30 to 90 minutes after ingestion. Because THC is stored in the body’s fat deposits, the effects of marijuana consumption can last for several days.

Symptoms
Signs include: incoordination and listlessness along with dilated pupils, slow heart rate and sometimes urine dribbling. Dogs may be hyper-responsive to stimuli; another characteristic of ingestion is the pet appears drowsy and even may begin to fall over but catches balance. Marijuana toxicity can look similar to intoxication with numerous other sedatives. To discriminate pot versus other substances, a urine test similar to what may be used in people can be done to make an accurate diagnosis. 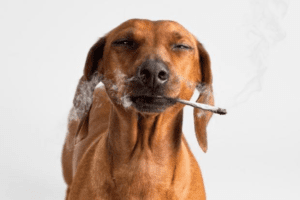 Some owners worry that if an illegal drug is involved, that they will be reported. It’s important to know that veterinarians are not obligated to report anything to local police. Most just want to help the pet. And to do that, it’s important that your veterinarian know the drug ingested, whether marijuana or other recreational drugs.

Urine testing similar to that done with humans can be done in dogs to make the diagnosis of marijuana intoxication. Test kits are available at most drug stores and can include assays for a number of recreational drugs. But false negatives are common when the THC urine test is performed on pet urine; a positive is confirmatory but there are many false negatives as the metabolites relevant to the test are different between dogs and humans. In most cases, the diagnosis is made based on the clinical presentation of the dog plus history of marijuana exposure.

Treatment
Vomiting is usually not successful as pot is a great anti-nausea drug. Also, if the patient is extremely sedated, vomiting can be dangerous as vomit can be inhaled and cause aspiration pneumonia.

Activated charcoal is a liquid material used to prevent further absorption of pot. It can be used to block absorption if ingestion has occurred recently (approximately the last few hours).

Fluid support and keeping the patient warm is often needed if the amount ingestion is high and the dog’s body temperature is low with low blood pressure. If the patient has lost consciousness, then more intense observation and support is needed.