Asthma is an ongoing respiratory disease where the airways are constricted (narrowed). The disease results in the airways of the lung being inflamed plus they are extra reactive to stress or respiratory irritants, and the flow of air through the lungs is reduced (either sometimes or all the time.)
First, excess mucus forms, the airway walls swell with inflammation and can actually ulcerate, and finally the airway muscles go into spasm leading to constriction.
When the airways constrict, it causes the inability to draw a deep breath, intolerance to exercise, coughing, and musical sighing sounds called “wheezes,” though not all these symptoms may be apparent at the same time.
Sometimes a low-grade chronic cough that happens every 1-2 weeks is the only early sign owners see. But just as in people, a sudden asthmatic crisis can arise at any time and can be life-threatening. Asthmatic airway constriction can happen spontaneously or as a type of allergic reaction. When it comes to treatment, relieving and preventing airway constriction and inflammation is what we tray and accomplish.

Is Feline Asthma the Same as Human Asthma? 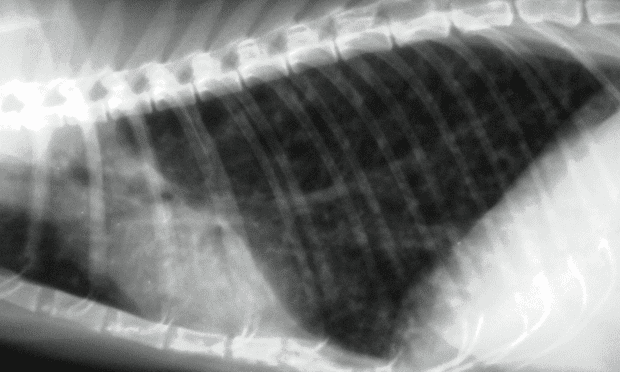 The feline condition was named asthma due to the its similarities with the human disease. As of this time, it appears that all the diagnostic criteria needed to diagnose asthma in people are shared by cats.

How is the Diagnosis Made?

Because of the constricted airways, over time, the actual volume of air this patient can move in and out of the lungs each breath is reduced. There is often a great deal of effort seen in the cat’s breathing. The abdomen appears to be working to push air out and the breaths are shallow and rapid. The cat may even be breathing with its mouth open in an effort to move the largest possible amount of air.

The next step toward making a diagnosis of feline asthma is chest radiographs, assuming the cat is not in too much distress to hold still for this procedure. Classically, the radiographs will show hyperinflated lungs from air that is trapped. Additionally, the airways may show signs of inflammation.

It is possible to view the tiny asthmatic airways in good higher detail on radiographs due to the brightness caused by airway inflammation. Inflammation looks bright white on x-rays.
Inflammation and mucus build up within the airways causing their walls to appear thickened in the radiograph. The terms used for such airway appearance are doughnuts (when viewing the airway end-on) or tramlines (when viewing the airway from the side). You may hear your veterinarian use these terms and they are classical findings in airway disease.

Some Asthmatic Cats have Normal Radiographs

Since visible changes are not always evident on radiographs, especially early in the disease before excessive air trapping and inflammation occur, diagnosing asthma can sometimes be harder than expected and other diseases that can cause coughing need to be ruled out. In fact, almost 25% of asthmatic cats can have completely normal radiographs.

The coughing cat with normal chest radiographs poses a diagnostic dilemma. It is hard enough to sort out potential issues when there actually are radiographic changes as many conditions can mimic others. Because of the nature of feline heart disease, where the heart muscle can thicken without the overall external shape of the heart changing, heart disease should be considered.
In heartworm endemic areas, feline heartworm disease should be considered. If the patient is thought not to have too high an anesthetic risk, a wash of the lower airways can be done to try and help make the diagnosis.
The samples collected this way can be sent out for clinical pathology where cells are evaluated by a pathologist. A bacterial culture should also be done to ensure there isn’t a lower airway infection. Another option is CT (cat scan) imaging.

Response to Therapy as a Diagnostic Test

One important asthma feature is that the airway constriction can be reversed while taking medication. In an emergency situation, an inhaled dose of a bronchodilator such as albuterol can quickly help the symptoms. Response to an injectable corticosteroid (such as dexamethasone) generally yields a positive response within 30 minutes.

Sometimes, diagnostic tests still leave room for question and you have to simply go with medical treatment for asthma and regard response to therapy as evidence that the diagnosis is correct. See below for list of medications commonly used in the long-term management of this problem.

It is crucial to realize that the underlying problem in the airway is inflammation. Inflammation is what is responsible for the constriction. To resolve the inflammation, corticosteroid medications have been the cornerstone of therapy. In an emergency, this can be given by your veterinarian injectably. Once stable, they can be given in pills. Once the pills build up in the system, a more recent use of a metered dose inhaler can by used long term with less side effects.
Usually treatment is started with an oral corticosteroid such as prednisolone. This medication is relatively inexpensive and a good response to them helps confirm the diagnosis, as mentioned.
A better strategy might be to use oral or injectable steroids to ensure that they work and if they do, change to a metered dose inhaler (see below) as there is much less potential for corticosteroid side effects with an inhaler.
If the response to oral corticosteroids is good, the cat is transitioned to an inhaled steroid such as Flovent and the bronchodilator Albuterol for a crisis.
Again, long-term corticosteroid use has some potential for side effects, so ultimately, a metered dose inhaler should be considered.

Human asthmatics have enjoyed the benefits of portable inhalers for years. These handy devices deliver medication locally to the airways, thus minimizing drug side effects to the rest of the body while maximizing desired response. There were two problems with using these devices in cats:

Interestingly these same problems apply to human infants with asthma and a device called a pediatric spacer was invented for them. This tubular chamber is attached to the inhaler on one end and a face mask on the other. The inhaler is actuated into the spacer and the infant simply breathes in the spacer’s contents.

The discovery that the pediatric spacer could also be used for cats has solved the feline inhaler problem as well. The set up is the same as described above for young children and the cat takes 7 to 10 breaths from the face mask to be properly dosed. Corticosteroid inhalers, Flovent® being the most popular, are typically used twice daily long term while airway dilator inhalers such as albuterol-containing Proventil® or Ventolin® are used for flare-ups (crises).

Pediatric equipment is generally available from most human pharmacies, however, a device created specifically for feline use can be ordered. It comes with the spacer and an appropriately sized face mask. Your veterinarian will need to prescribe the metered dose inhaler usually from a regular human pharmacy.

Are there other Treatment Options?

Terbutaline (Brethine®) and theophylline are airway dilators commonly used in the management of asthma. It makes sense that if constriction is an important feature of this disease that eliminating constriction would be therapeutically helpful. Terbutaline is available orally or as an injectable.

Some veterinarians encourage owners to keep a bottle of injectable terbutaline at home in case of a crisis and show them how to give it. If you are interested in this, let your veterinarian know. Theophylline is an oral medication usually given once a day at bedtime.

Please remember:
Minimizing irritants in the air is always helpful to an asthmatic cat.

It is important to realize that asthma can culminate in a respiratory crisis that can become life-threatening if ignored. If your cat begins to breathe with an open mouth or if you see excessive abdominal movement during breathing and the cat is not purring, you may have an emergency situation. Contact your veterinarian immediately.