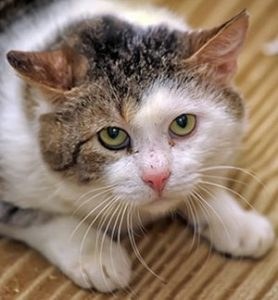 What Causes Pancreatitis in Cats?

Unfortunately, 90% of the time we never find out. We have some idea of possible risk factors, though.

Chances are the cause of pancreatitis for a given patient will never be determined.

If your Cat has Pancreatitis, what might you Observe at Home?

In dogs and humans, this condition is associated with a lot of nausea and abdominal pain. According to one recent study in cats, though, only 35% of cats with pancreatitis showed vomiting and only 25% appeared to have abdominal pain. Fever is a possible sign but often the temperature will drop instead. Lethargy and appetite loss are consistent signs. Nearly all cats with pancreatitis lose their appetites, and about half of them will have been affected long enough to show weight loss.

There are three parts to treatment: removing the cause of the pancreatitis (this is usually not possible since the cause is only rarely known), general support and symptomatic relief through the inflammatory crisis, and monitoring and instituting protection against the disastrous complications listed above. Intravenous fluid therapy is used to support the pancreatic vasculature and combat any dehydration from vomiting or diarrhea. This simple act of perfusing the pancreas enables damaging inflammatory biochemicals to be flushed away and healing to begin.

Medicines are used to control pain and nausea.  In the dog, high fat diets are important predisposing factors for pancreatitis but this appears not to be true for cats. Pre-existing inflammatory bowel disease seems to bear more feline relevance so treatment in that direction seems more appropriate (steroids, antacids, low residue diets or hypoallergenic diets).  Anecdotally, digestive enzyme supplementations are felt to be helpful in some cases. In the past, food restriction was included in treatment to rest the sensitive pancreas but newer thinking is that the entire GI tract heals faster when food is passing through it.