A syndrome is a collection of symptoms that have significance when they go together. It is important to realize that having a syndrome is not the same as having a diagnosis. A syndrome, however, often has a limited number of causes such that recognizing a specific syndrome brings one substantially closer to a diagnosis.

What is Horner’s Syndrome?

All these signs are caused by damage to sympathetic nervous system as it supplies the eye on the affected side of the head.

What is the Sympathetic Nervous System? 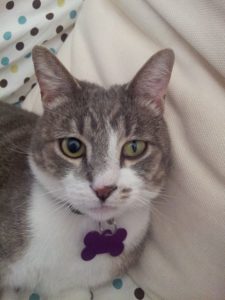 In the eye, the sympathetic nerve fibers dilate the pupil, widen the eye lids, drop the third eyelid, and keep the eye in a forward position in the socket. The parasympathetic nerves constrict the pupil, raise the third eyelid and retract the eye for protection. Both systems are working at the same time, one system slightly dominating the other depending on what is happening.

How can the Sympathetic Damage Occur?

The nerves originate in the brain’s hypothalamus and travel through the brainstem and down the spinal cord in the neck area, exiting just inside the chest at the level of the second thoracic vertebra. (This pathway shown in blue and is called the central segment. Damage here is called a first order lesion.) The nerves then form the cervical sympathetic trunk, a bundle of nerves that travels back up the neck, this time outside the spinal cord, to the vicinity of the middle ear. (This area is shown in red and is called the preganglionic segment.) There is a separate nerve bundle on the right and left sides.

Damage to this area on either side is called a second order lesion.) From there, the nerves then connect to new nerves just below the ear and continue their journey to the eye. These pathways, one on the right and one on the left, are shown in yellow and are called the postganglionic segments. As you have probably guessed, damage here is called a third order lesion.The nerve carrying the tiny nerve fibers that provide sympathetic control to the eye have a long path. The damage may have occurred anywhere along this path.

The damage can occur in the neck or spinal cord area, the ear area or the eye area. Damage can occur in the form of trauma, tumor involvement, infarction (abnormal blood clot), middle ear infection, or diseases of the eye itself. Each segment of the nerve pathway is vulnerable to different types of damage so that knowing which segment is involved gives us a good idea of what caused the damage.

Diseases that hit nerve fibers in the brain, brainstem, or spinal cord include tumors of the brain, vascular accidents (such as stroke) in the nerve tissue, fibrocartilaginous embolism in the spinal cord where disk material sprays into the spinal cord, or even a herniated intervertebral disk in the area of the neck. Horner’s syndrome stemming from any injury such as one of these might prompt a search for other neurologic issues. Advanced imaging such as an MRI might be a good idea.

Diseases that strike the sympathetic trunk include foreleg injuries especially if the foreleg is pulled and the nerves that exit the spinal cord in the armpit area become over-stretched. Sometimes a mass in the chest, such as a tumor or fungal granuloma, will damage the sympathetic trunk. Neck trauma such as pulling very hard on a leash could be severe enough to cause a second order lesion. If there is no obvious history to suggest injury, it might be a good idea to radiograph the chest to see if there are masses in the lung that might be involved in a second order lesion.