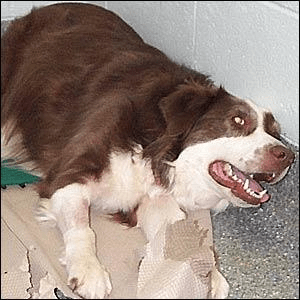 There’s nothing more startling and scary than seeing your animal companion have a full-blown seizure for the first time. The following information can help you recognize different types of seizure and help guide you on what to do.

Types of seizure and how to tell if your dog had one?
A seizure results from excessive electrical activity in the cerebral cortex of the brain. The electrical activity starts in one area (called the seizure focus) and spreads in a process called kindling. Classically, the patient loses consciousness, collapses, becomes stiff at first and then begins paddling or struggling but seizures can take many forms. Any involuntary behavior that occurs abnormally may represent a seizure. Seizures are classified into several categories.

Generalized (Grand Mal) Seizures
This is the most common form of seizure in small animals. The entire body is involved in stiffness and possibly stiffness/contraction cycles (tonic/clonic action). The animal loses consciousness and may urinate or defecate.

Focal Seizures (Also Called Partial Motor Seizures)
Focal seizures involve involuntary activity in only one body part. Consciousness may or may not be impaired.

Seizures (neurological events) can be tricky to discern from fainting spells (cardiovascular events). The seizure is also typically followed by a post-ictal period during which the animal appears disoriented, even blind. In contrast, fainting animals are usually up and normal within seconds of the spell.

Whether you feel your dog had a seizure or a fainting spell, once you companion behavior relaxes to enable him or her to be transported safely, you should bring your canine companion to your family veterinarian or if after hours to a 24/7 ER.

If the episodes don’t stop, your pet should be transported in whatever manner you can wrangle keeping everyone as safe as possible – continuous seizures can further brain damage, result in over heating as well as low blood sugar. Your family veterinarian can help you diagnose and treat seizures.
Treatment

In 2016, the American College of Veterinary Internal medicine published a consensus statement on this very subject. If the dog fits into any of these criteria, medication to suppress seizures should be initiated:

When seizures occur in “clusters,” that is, more than 3 seizures within a 24-hour period.
When two or more isolated seizures occur within a six month period.
If a seizure has lasted 5 minutes or more.
If the seizures or their post-ictal disorientation periods are particularly severe.
If the dog has a visible structural lesion on a CT, MRI or even a radiograph.
If the dog has a history of brain injury or trauma.
It should be noted that the German Shepherd dog, Border collie, Australian shepherd, Golden retriever, Irish setter, and Saint Bernard breeds are notorious for difficulty in seizure control. It is best not to wait for frequent seizures in these cases as each seizure makes the next more difficult to control. Often medication is started in these individuals after the first seizure. The more seizures the patient experiences, the more difficult control becomes in the future.

Veterinary Clinic Houston Heights
If you think your canine companion has a seizure disorder, Urban Animal can help. Call us with questions or to schedule an appointment today.