Tapeworm Infections in Dogs and Cats 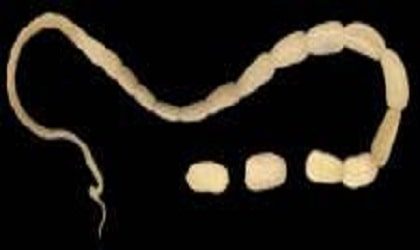 Tapeworm Infections in Dogs and Cats

The Parasite and how it works…

The adult Dipylidium caninum lives in the small intestine of the dog or cat, attached to the intestinal wall by several suckers as well as by a structure called a rostellum, which resembles a hat with hooks on it. Most people are confused about the size of a tapeworm because they only see its segments which are small; the entire tapeworm is quite large at 6 inches or more.

The tapeworm head attached to the intestinal wall and begins growing a long tail. The tail is made up of segments, which oddly act like a separate independent body, with its own digestive system and reproductive tract. The tapeworm absorbs nutrients through its skin as the food being digested by the host flows past it.

Older segments are pushed toward the tip of the tail as new segments are produced by the neckpiece. By the time a segment has reached the end of the tail, only the reproductive tract is left. When the segment drops off, it is basically just a sac of tapeworm eggs.

The sac, called a proglottid, is passed from the host’s rectum and out into the world, either on the host’s stool or on the host’s rear end. The segment is the size of a grain of rice and moves. This is what most pet owners see.

Eventually the segment will dry and look more like a sesame seed. The sac breaks and tapeworm eggs are released. These eggs are not infectious to mammals.

Meanwhile, fleas living on the pet have been happily drinking the pet’s blood, mating, and laying eggs. This will also be where tapeworm segments accumulate. When the flea eggs hatch, releasing ravinous flea larvae, the larvae eat the tapeworm eggs.

As the larval flea develops, so does the tapeworm inside it. By the time the flea is an adult, the tapeworm is ready to infect a dog or cat. The young tapeworm is only infectious to its mammal host at this stage of its development. The flea goes about its business of sucking blood and reproducing when some pets lick and swallow it up, and so the life cycle begins.

Inside the host’s stomach, the flea’s body is digested away and the young tapeworm is released. It finds a nice spot to attach and the life cycle begins again. It takes 3 weeks from the time the flea is swallowed to the time tapeworm segments appear on the pet’s rear end or stool.

Why is it Called a Tapeworm?
This creature gets its name because its segments and body are flat and look like a piece of tape.

What do they Look like?
The adult tapeworm inside the pet can be a half a foot or more long. It is made of small segments, each about the size of a grain of rice. The tapeworm’s head hooks onto the pet’s intestine by tiny teeth and the worm absorbs nutrients through its skin. Each segment contains a complete set of organs but as new segments grow in at the neck area and older segments progress to the tip of the tail, the organs disintegrate except for the reproductive organs. When the segment drops off from the tail tip, it is only a sac of eggs.

This segment is white and able to move when it is fresh and, at this time, looks like a grain of white rice. As the segment dries, it looks more like a sesame seed.

Where do they Come from?
There is no other way for a pet to get Tapeworms except from eating infected fleas.

Many people who had thought their pet could not possibly have fleas find out about the infestation this way. The tapeworm segment breaks open, releasing its eggs. A larval flea consumes the egg along with the flea dirt that it normally eats. As the larval flea matures, so does the baby tapeworm. When a grooming dog or cat licks the flea and swallows it, the dead flea is digested in the pet’s stomach and releases the baby tapeworm. The tapeworm is passed to its new home in the dog or cat’s small intestine where it attaches and lives its life.

This parasite does not harm the pet in any way as there are plenty of nutrients passing by to serve both the host and its tapeworm (tapeworms require very few nutrients). Still, high-performance dogs who need every calorie working for them, may show a decrease in performance because of a tapeworm infection.

How Do you Know if your Pet has them? Why do they Sometimes Fail to Show up in a Fecal Test?
Because the eggs are passed by the pet in packets (segments), they often do not show up on the fecal exam; the packet must break open for the eggs to be seen. Consider that the pet has tapeworms if segments are seen under its tail, around its anus, or on its feces. Segments can be passed in small groups connected to each other, leading the owner to describe a worm that sounds larger than a grain of rice. Tapeworm segments are also quite flat.

Some people will mistake maggots in the stool for tapeworms. Maggots are not seen in freshly passed stool and are not flat.

Can People Get them?
Theoretically, yes, people can get them but they must be infected the same way dogs and cats are: by swallowing an infected flea.

How do we Get Rid of Them?
Tapeworms are killed by different medications (praziquantel, which is administered by injection, tablet, or topically. Fenbendazole is effective against several types of tapeworms but not against Dipylidium caninum.

Why do some Veterinarians Recommend Two Treatments and Others only Recommend One?
Only one treatment is needed to kill the tapeworms in the body; however, many clinics recommend a second injection in three weeks. The reason is that if the owner finds out at the time of their office visit that they need to control fleas to control tapeworms, they will need at least a month or so to control the fleas.

On the other hand, who knows when the pet will swallow another infected flea? My recommendation is that a single treatment be administered whenever segments are seen.

If One Pet Has Tapeworm Segments, Can it be Assumed that they all Do?
No, just because one pet in the household has swallowed an infected flea does not mean they all have. However, since the pets are all exposed to the same flea population, there is a chance that other household animals may become infected. Watch out for tapeworm segments. If seen, tell your veterinarian so it can be treated.

Why Might a Pet Continue to get Tapeworm Infections?
While many people would like to blame the medication as ineffective, the truth is that there must be an on-going flea population in the pet’s environment. The key to eradicating Dipylidium caninum is flea control.

While many people would like to blame the medication as ineffective, the truth is that there must be an on-going flea population in the pet’s environment. The key to eradicating Dipylidium caninum is flea control.