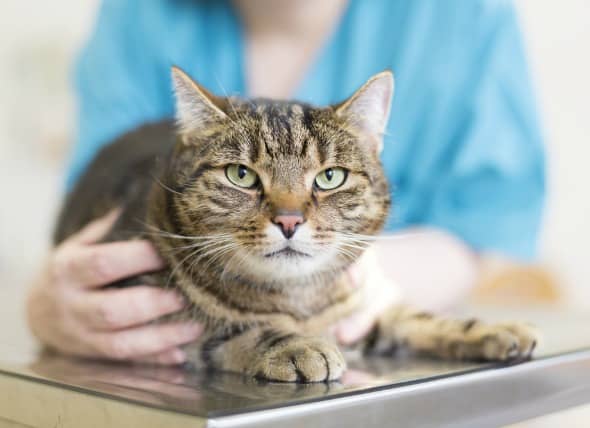 Coccidia are single-celled organisms that infect the intestine. They are microscopic parasites detectable on routine fecal tests in the same way that worms are, but coccidia are not worms and are not susceptible to deworming medications. They are also not visible to the naked eye. Coccidia infection causes a watery diarrhea that is sometimes bloody and can be a life-threatening problem to an especially young or small pet.  Dogs and cats each have their own coccidia species and cannot infect each other nor can they infect people.

Where do Coccidia come from?

Oocysts (pronounced o’o-sists), like those shown above, are passed in stool. In the outside world the oocysts begin to mature or sporulate, which leaves them able to infect a new host. It only takes 12 to 36 hours for an oocyst to become infective, and after that any host that accidentally swallows the oocyst will probably be infected. Because the oocyst becomes infective in such a short time, it is important to remove stool as quickly as possible so that the pet’s environment does not become contaminated with infective oocysts. Coccidia infection is especially common in young animals housed in groups (in shelters, rescue areas, kennels, etc.) This is a common parasite and is not necessarily a sign of poor husbandry.

Oocysts can also be swallowed by mice, flies, cockroaches or other insects. A dog or cat can be infected by eating another animal that is carrying an oocyst.

What Happens Inside the Host?

Merozoites divide and reproduce asexually but eventually a sexual generation of coccidia results in microgamonts, which are male, and macrogamonts that are female. They merge and create an oocyst, which is what started the whole thing in the first place. The oocyst passes in stool where it can infect a new host and the life cycle begins again.

How are Coccidia Detected?

A routine fecal test is a good idea for any new puppy or kitten whether there are signs of diarrhea or not as youngsters are commonly parasitized. This sort of test is also a good idea for any patient with diarrhea and is recommended at least once a year for healthy dogs and cats as a screening test. The above photograph shows coccidia oocysts seen under the microscope in a fecal sample. Coccidia are microscopic and a test such as this is necessary for diagnosis. Small numbers of coccidia can be hard to detect, so just because a fecal sample tests negative, this doesn’t mean the pet isn’t infected. Sometimes several fecal tests are performed, especially in a young pet with a refractory diarrhea (one that won’t go away); parasites may not be evident until later in the course of the condition.

How is Coccidia Treated?

There are two common treatments used for Isospora infections in pets: sulfa drugs (the traditional treatment) and coccidiocidal medications (newer treatment). The most common medicines used against coccidia are called coccidiostats. They inhibit coccidial reproduction. Once the numbers stop expanding, it is easier for the patient’s immune system to catch up and wipe out the infection. This also means, though, that the time it takes to clear the infection depends on how many coccidia organisms there are to start with and how strong the patient’s immune system is. A typical treatment course lasts about a week or two, but it is important to realize that the medication should be given until the diarrhea resolves plus an extra couple of days. Medication should be given for at least five days total. Sometimes courses as long as a month are needed. In dogs and cats, sulfa-based antibiotics are the most commonly used coccidiostats.

There are newer medications that actually kill the coccidia outright: ponazuril and toltrazuril, both actually being farm animal products that can be compounded into concentrations more appropriate for dogs and cats. These medications are able to curtail a coccidial infection in only a few doses and have been used in thousands of shelter puppies and kittens with no adverse effects. Their use is becoming more popular used in kennels, catteries, and animal shelters and you may be pleasantly surprised to find one of them in stock at your regular veterinary office.

Can People or other Pets Become Infected?

While there are species of coccidia that can infect people Toxoplasma and Cryptosporidium, for example), the Isospora species of dogs and cats are not infective to people. Other pets may become infected from exposure to infected fecal matter but it is important to note that this is usually an infection of the young (i.e. the immature immune system tends to let the coccidia infection reach large numbers whereas the mature immune system probably will not.) In most cases, the infected new puppy or kitten does not infect the resident adult animal.