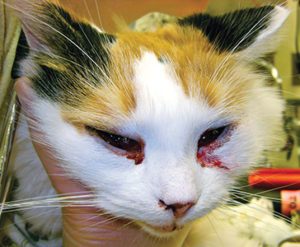 The conjunctival membranes of the eye are basically the pink part under the eyelids and the lining of the eyelids themselves. When they are irritated, they redden and can become itchy, dry, and uncomfortable. The cornea, or clear dome-like covering of the eye, can become involved in the inflammation. It can become cloudy or even ulcerated. Tear production can be reduced leading to a chronically dry, uncomfortable eye.

Conjunctivitis in cats is typically of viral origin and usually that means a herpesvirus (feline herpesvirus-1 to be specific) infection. Herpesviruses grow in the tissues of the body that interface with the environment, such as the upper respiratory tissues and conjunctivae. The infection begins with an initial phase that is usually the most severe in terms of symptoms. This phase resolves but the virus itself does not go away; instead, it retreats into the neurologic structure in the head called the trigeminal ganglion where the patient’s immune system holds it prisoner. In times of stress, the immune system is taxed and the virus is able to escape from the ganglion, traveling out via the nerves exiting the ganglion. The result is the return of symptoms. In this way, the infection is permanent but the symptoms of the infections come and go.

Symptoms include conjunctivitis as described above but also nasal and respiratory symptoms such as sniffles, runny nose, and fever, basically the symptoms of upper respiratory infection.  As mentioned, the first episode is generally the worst and subsequent episodes are more mild.

Herpes infection is extremely common in young kittens, especially those facing other stresses (fleas, poor nutrition, environmental cold etc.). Feral kittens, waifs of the streets, outdoor kittens, shelter kittens, etc. are all high risk for herpes infection. Young kittens can produce so much ocular discharge that their eyes gum closed, sealing the infected secretions around the eye. It is important that the eyelids be opened manually to allow drainage of secretions as well as application of medicine. The swelling of the conjunctivae can be so severe that the eye itself is not visible.

In severe cases, the eye can rupture and become permanently blinded. Treatment is crucial and response to topical therapy is usually dramatic.

As mentioned, herpes infection typically causes respiratory signs as well: snotty nose, congestion, etc. These signs can result in life-threatening loss of appetite and dehydration in a young kitten, while signs are generally minor in an adult cat whose immune system is mature. Kittens with obvious discomfort should be examined by a veterinarian. Oral antibiotics will most likely be needed and sometimes hospitalization is also necessary for proper supportive care.

Since kittens are so commonly affected with herpes, it is not unusual to find oneself in possession of an adult cat with a history of herpes infection. These individuals will have recurring conjunctivitis in times of stress. Typical signs include squinting slightly in one eye, a noticeable increase in eye discharge (usually brownish in color), redness of the conjunctivae, or all of the above.

How do we Know it is Herpes?

There are several feline infectious diseases that can cause conjunctivitis: basically all the agents that contribute to feline upper respiratory infection also cause conjunctivitis. Frequently they are present in combination. The chances are that it will not be worthwhile to determine which agents are there; it is more practical to treat for bacterial agents and secondary bacterial infections first and then see if antiviral medications turn out to be needed.

That said, if you really want to know if a cat has herpes, a polymerase chain reaction (PCR) test is probably the best test to run. This test is able to detect even small amounts of herpes DNA and is much more sensitive than the prior form of testing, which involved antibody levels. The problem is that herpes infection is so extremely common that most cats in any given area are going to test positive, indicating they are harboring the virus in their bodies. Having a herpes infection is not the same as having an active herpes infection, so testing a cat will determine if the cat is harboring herpes but will not determine if herpes is active.

So how do we know it’s herpes? We probably will not know for sure but if a stressed cat has conjunctivitis involving the cornea, the chances are that herpes is afoot.

How Can we Treat it?

There are several treatment methods that can be combined in the treatment of feline herpes eye infections.

Topical Anti-virals
There are several eye drops available that act directly against the herpesvirus. They include: idoxuridine (no longer commercially available and must be obtained from a compounding pharmacy); Viroptic® (trifluorothymidine); cidofovir (which also must be obtained through a compounding pharmacy); and Vira-A® (vidarabine). These medications are relatively expensive and typically need to be given five times daily with the exception of cidofovir, which accumulates in the eye tissues and allows for twice daily dosing.

Oral Lysine
Herpes viruses as a group are highly dependent on an amino acid called arginine. Without arginine, a herpesvirus cannot reproduce. The amino acid lysine is taken up by the virus in favor of arginine. We can take advantage of this situation by saturating the virus with lysine and thus suppressing the virus’s ability to replicate. Lysine is readily available in most health food stores as a tablet or capsule. Be sure that the formula used is free of the preservative propylene glycol as cats can have blood reactions against this compound. Alternatively, many feline lysine products are now available. These include chewable treats, gels, and granules. A month or so of supplementation is required in order to determine if it has been helpful.

It should be noted that some infections lend themselves to prevention by the vaccination process and others do not. Herpes rather does not; this means that vaccination of healthy cats does not prevent infection for feline herpes; what it does do is lead to less severe signs. Vaccination against feline herpes has been deemed helpful but one should understand that, in this case, the goal is not total prevention of infection but palliation.