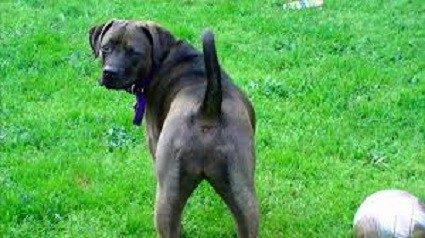 What causes the gas?

Flatulence is a normal biological function. A surprising amount of air is swallowed with the simple act of eating and if this is not burped out, it must exit through the other end. The amount of air swallowed tends to be increased when dogs feel they must eat quickly or in the brachycephalic breeds who tend to breathe more by mouth rather than by nose. Swallowed air tends not to have objectionable odor.

The smelly gases are produced by colon (large intestine) bacteria. Dietary fiber in pet food is not readily digestible by the pet’s own enzyme systems but is readily digested by the gas-producing bacteria of the colon. As these fibers are broken down, gases are produced. A diet heavy in fibers tends to favor gas-producing organisms. The more supportive the intestinal environment, the more bacteria there will be and more gas will result.

The following are easy changes that can be made in your management of the pet:

Sometimes just going through a case and/or bag of a low residue diet solves the problem and the pet can return to a regular food afterwards. But not always. If needed, the therapeutic (low fiber) diet can become the pet’s regular food. Low-residue diets are available through your veterinarian.

A carminative is a medication that reduces flatulence. There is an assortment of available products, but unfortunately most are not helpful or even labeled for animal use. Changing the diet and ruling out actual intestinal disease are of primary importance in addressing flatulence. If further therapy is needed, the following products have some basis to suspect they might work:

Currently this extract is labeled as a flavoring agent for pet food but it is also available as an oral supplement. Several studies have shown that it helps decrease the odor in flatulence.

Zinc binds to sulfhydryl compounds in flatulence ultimately serving to deodorize the gas.

Such antibiotics serve to kill the gas-forming bacteria of the colon and may be helpful as long as their use is not ongoing.

Probiotics have some potential

There are many ineffective probiotics being marketed so it is important to use one that has been shown to actually contain live cultures and that its cultures withstand stomach digestion so as to populate the small intestine with beneficial bacteria. There are several veterinary products that are felt to be reputable: Prostora®  Proviable® and Fortiflora®. Fortiflora, Purina’s product, has been shown to be effective in reducing flatulence. Visbiome is a newer probiotic proven to have the appropriate bacteria to help the canine intestinal tract.