Pemphigus Foliaceus in Dogs and Cats 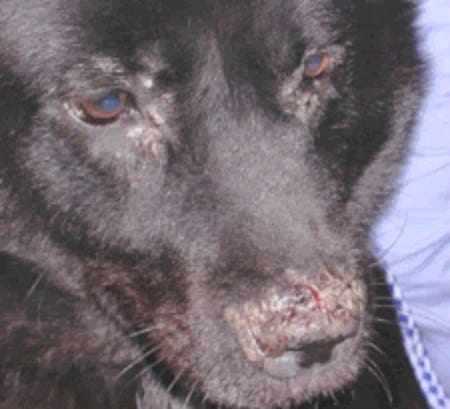 Pemphigus Foliaceus in Dogs and Cats

Pemphigus is an immune-mediated skin disease involving inappropriate immunological attack against a normal layer of the skin. Different types of pemphigus involve different areas of the skin.

Your Epidermis Is Showing

The outer layer of the skin is called the epidermis and consists of cells arranged in layers. Live new cells are at the bottom and dead cells are at the top, exposed to the outside world where they are constantly brushing off. The cells that make up the skin are keratinocytes (what we think of as skin cells), melanocytes (which produce pigment and give us a sun tan), Langerhans’ cells (part of the immune system), and Merkel cells (mechanoreceptors, which let the nervous system know we are being touched).

Let’s look at the layers of normal skin starting at the bottom:

Basal Layer (Or Stratum Basale)
This is where new keratinocytes are born. New skin cells, or keratinocytes, divide here and as they reproduce and make a structural protein called keratin, they are pushed upward until they die and form the outer skin layer. Basal keratinocytes are somewhat round or square and sit on a basement membrane under which are the cells of the dermis, muscle, and subcutaneous fat. Merkel cells and melanocytes also live in the basal layer but we are concerned with the maturing keratinocytes for now. The basal layer is one cell thick.

Spinous Layer (Or Prickle Cell Layer, Or Stratum Spinosum)
When basal cells divide they move upward to the spinous layer, which is 1 to 2 cells thick (much thicker on foot pads, the leather of the nose, and other special areas).  These cells appear to have little “prickles” connecting them, hence the name. Langerhans cells live in this area.

Granular Layer (Or Stratum Granulosum)
As the cells continue to divide, they move up to the granular layer (named for what appear to be granules inside the cells).  This layer is also 1 to 2 cells thick generally but is thicker around hair follicles.

Clear Layer (Or Stratum Lucidum)
Cells at this layer are now dead and fully keratinized. They are flat and tough. This layer provides a sort of extra layer of protection and is only in the food pads and leather of the nose.

The pemphigus skin diseases involve immunological attack against certain proteins that connect skin cells to one another.

Pemphigus Erythematosus
The attachment of the stratum corneum is attacked.

Bullous Pemphigoid
The attachment of the whole epidermis to the dermis is attacked.

A skin biopsy is required to determine if the condition is in fact one of the pemphigus diseases and if so, which one. A skin biopsy is generally done with a local anesthetic (unless the nose or face is to be sampled, in which case a more general sedative is usually necessary).  An instrument called a punch biopsy is used to remove a small round plug of skin in a cookie cutter-type fashion.  It is best to have a pathologist who specializes in reading skin tissues process the sample.

The treatment for pemphigus foliaceus is immune-suppression. In about 50 percent of patients, this is achieved with high doses of corticosteroids (either prednisone or dexamethasone. Secondary infections are common and antibiotic therapy is required.  Anti-bacterial baths may also help.

Side effects from high doses of steroid hormones are to be expected. The patient will drink excessively, urinate excessively, be very hungry, and gain weight. Dogs will pant a lot and cats run the risk of developing diabetes mellitus if they are on high doses long enough.  Incontinence from all the water consumption can be problematic. Mobility issues from obesity can also result.

For dogs who cannot tolerate steroids at doses high enough to control the pemphigus symptoms (or for whom steroids alone are unable to control symptoms), a stronger immune-suppressant called azathioprine is generally added. It should be realized that it can take up to 2 months for azathioprine to exert a significant effect and the corticosteroid is needed during this time.

Azathioprine has potential to cause bone marrow suppression and blood testing is needed every 2 weeks during initial treatment, though this interval can be tapered as the patient becomes more stable. For cats who do not tolerate or respond to corticosteroids alone, chlorambucil is similarly recommended with monitoring. Cyclosporine is probably best used in combination with corticosteroids though it may work as a sole agent in cats.

Expense and side effects can be very taxing for a pet-owning family and in one retrospective study of 43 dogs with pemphigus foliaceus a 60% mortality rate was observed, largely reflecting euthanasia.

Treatment for this condition is gradually withdrawn after the lesions are cleared up and the patient is stable. Many dogs ultimately discontinue all treatment permanently but this is after many months. It is important not to be discouraged by failure to achieve a rapid response; this condition requires time and patience.